Hi all! Sorry it's been awhile since my last posting however, I've been busy putting on a show!
Some of you might have seen the articles in Bay Windows and In Newsweekly about Buddy Starr's Fabulous Tour of Provincetown. We did it last week during that awful snowstorm that hit Boston. Despite the terrible weather we still sold out so Club Cafe asked us to do another one. We agreed and for this show (like the previous one) all proceeds will benefit the Point Foundation. 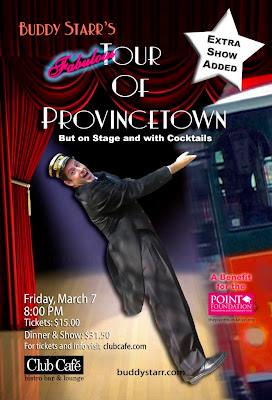 I can’t articulate how draining it is to keep having to refute the lies that Brian and Amy post on their respective websites, but it’s a job I’ve humbly taken on. Their latest rant brings up a lawsuit in California:

In California, a man who wants to be a woman is suing a Catholic hospital for refusing to allow his “breast augmentation” surgery there.

What they don’t tell you is that the Catholic hospital in California DOES perform plastic surgery and DOES do breast augmentations. They just want to discriminately pick and choose whose breasts they make larger. The bigger question is why is a Catholic Hospital doing cosmetic plastic surgery? Why the church isn’t happy with the way God made these people is beyond me:

Seton Medical Center provides medically necessary services to all individuals," Nikels said in a prepared statement. "However, the hospital does not perform surgical procedures contrary to Catholic teaching; for example, abortion, direct euthanasia, transgender surgery or any of its related components." The hospital did not comment directly on the lawsuit.

Gray[Ms. Hastings' surgeon] still performs breast enlargement surgeries at Seton on women who are not transgender.

They also don't tell you that the woman, Charlene Hastings, has already the major gender reassignment surgery i.e., the Catholic hospital won't be turning her from a man to a woman.
Posted by Boston Bud 3 comments: Wow, that's a whole $4,050 since last week. The way they're raising money, they should have enough money to buy new video camera and still have money left over to have Brian's trenchcoat cleaned.
Note: The picture at the right is from Boston Magazine and was printed with the article "Looking for Mr. Right", how ironic is that! Was it taken during his Sporters days?
Posted by Boston Bud 5 comments:

Mad Dad Parker is going to be on WBZ 1030 AM tonight from 9 to 10 on the NightSide with Dan Rea Program. Let's all tune in and don't forget to maybe even give'em a call!

Now You See It, Now You Don't!

It's been a week since I reported the last update of MassResistance's fundraising prowess. They are now listing that they've raised $32, 252.00 which would be an increase of $293.00 from the following week or roughly around $41.00 a day which would suit them if they budgeted their anti-gay activities like Rachel Ray budgets her "Best Eats in Town".

I should also point out that the Bunker Hill monument graphic is now gone from their website only to be replaced by a number tally:

I wonder if the graphic of a huge erection on their site was turning on their viewers?
Posted by Boston Bud No comments: