As June descends upon us tomorrow, I'm reminded of that Pride, not so many years ago when MassResistance complained to Macy's because of their transgender mannequins...yes, they said Macy's had transgendered mannequins and even took pictures of other mannequins in the store to compare and contrast. Macy's caved and gave into the crazy group only to find out how really crazy they really were and faced a HUGE backlash. Macy's made up for their faux pas and has continually supposed the LGBT community. This was more than evident in the ad below which I found in Out Magazine: 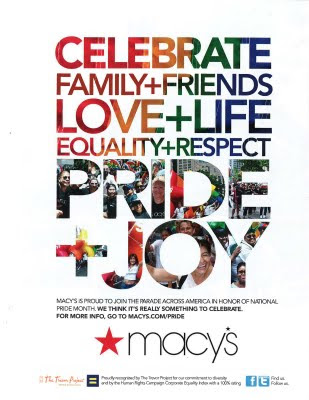 Old Navy REALLY needs to hear from as many of you as possible. It won't take you long, but will be effective. Let them know you will NEVER shop in their stores EVER, and you will spread the word.

MassResistance Takes Credit for the Sun Rising and Adds Another Success?

Well, it's possible, you see MassResistance is now taking credit for Kevin Jennings leaving his job in the Department of Education in JULY. Of course he was bound to leave his post at some point and since many people in the first term of an administration leave before their term is up, forget that! MassResistance is taking credit because their "online petition" was, I don't know, ONLY STARTED 18 MONTHS ago!

Over the past eighteen months MassResistance has waged a battle in get Congress either to have Jennings' office defunded, or have him removed. We compiled and posted a large report of Jennings' activities going back decades-- most of which MassResistance uncovered. In addition we've gathered over ten thousand signatures from across America on our online petition. And we've been communicating with various key Congressmen and their staffs, as well as other Washington DC insiders, to push this as hard as possible...

...THANK YOU to everyone across the country who signed our petition and who helped get the word out. Getting Kevin Jennings out of the Dept. of Education is a great victory for all Americans!

And who do you think is picking up their story? Why all the crazy "pro-family" "news" on the web:
I wonder what MassResistance will claim credit for now? They never even got those signatures that they said they were definitely going to get to overturn the 1913 law in Massachusetts and I believe they're still claiming they're going to be back on the radio some time soon...yeah, right!
Posted by Boston Bud No comments:

Focus on the Family - Losing on Marriage

The new head of the Focus on the Family, Jim Daly, had this to say about same sex marriage:

We're losing on that one, especially among the 20- and 30-somethings: 65 to 70 percent of them favor same-sex marriage. I don't know if that's going to change with a little more age—demographers would say probably not. We've probably lost that. I don't want to be extremist here, but I think we need to start calculating where we are in the culture.

So some of the anti-gay right are finally starting to see the writing the wall. In the article he also talks about getting their own marriages in order before they start attacking others. This also makes perfect sense especially for all those people claiming to "defend marriage" while divorcing like crazy, cheating on their spouses and trying to tear apart other families.
Posted by Boston Bud No comments:

It's the End of the World as We Know It

Harold Camping, the 89-year-old Christian evangelist from Oakland, Calif., whose Family Radio broadcasts are heard in 61 languages, doesn't just think that Judgment Day will come Saturday. He guarantees it.

"It is absolutely going to happen," said Camping, who has determined after five decades of studying Scripture that May 21 marks the beginning of the end. "We do not have a Plan B at all. There is no possibility that it will not happen, because all of our information comes from the Bible.

People are going to be risen and the heathens will be left on earth to deal with earthquakes and explosions that will last until the final doomsday sometime in the fall. Wouldn't you think God would want to get it over and done with all at the same time? Hasn't God heard of multi-tasking, you know, raise up the Christians and abolish the rest of the earth all at the same time because apparently, according to Camping, God is doing it by time zones, so no lines no waiting at the gates of Heaven.

All this news reminds me of the episode of "6 Feet Under" when some guys filled blow up dolls with helium and then released them. When a "Christian" saw the dolls going up into the air she ran towards them to be risen and was hit by a car and killed. I guess she got her wish!

A study commissioned by the Catholic Church concluded:

The sexual abuse crisis in the Catholic Church was caused by the influence of sweeping social changes and increasing “deviant behavior’’ of the 1960s and 1970s on priests who were inadequately trained, emotionally unprepared, and isolated, according to a new report commissioned by the nation’s Roman Catholic bishops.

Researchers at John Jay College of Criminal Justice at the City University of New York, who spent five years conducting the most expensive and extensive study of sexual abuse in the Catholic church to date, concluded that homosexual priests were no more likely to abuse than heterosexual priests.

If you recall Santorum and the anti-gay loonies were blaming gay priests for all the molestation when it appears that:

The report notes that homosexual men began entering the seminaries “in noticeable numbers” from the late 1970s through the 1980s. By the time this cohort entered the priesthood, in the mid-1980s, the reports of sexual abuse of minors by priests began to drop and then to level off. If anything, the report says, the abuse decreased as more gay priests began serving the church.

Another MassResistance Candidate Goes Down in Flames

Last week MassResistance was practically falling over themselves for "the real thing":

Candidate Jim Dixon, a Republican, is the real thing -- we can't stress that enough. He's a true conservative, a Tea Party guy, a solid Catholic, and very smart. He's also a Navy veteran and a commercial pilot. You can find out more about him at his campaign website. Getting a guy like him in the Legislature would be wonderful. He will help change Massachusetts back to normal.

Of course, MassResistance has NO IDEA was normal even is! Well, this Tea Partier got beat by a truly normal guy:

According to results released by Waltham City Clerk Russ Malone, Lawn won Waltham by a 987-624 margin, a difference of roughly 22 percent. In Newton, Lawn edged Dixon 374-145, taking about 72 percent of that city's vote. And in his hometown of Watertown, Lawn earned a whopping 82 percent of the vote, besting Dixon 453-99.

Massachusetts needs MassResistance to keep vouching for candidates then we all win!
Posted by Boston Bud No comments:

Well, Massachusetts has a new person on Mass Supreme Judicial Court, she's a woman, a mother and just happens to be a lesbian and is MassResistance is having a conniption fit!

First it started with all their anti-gay testimony at the hearing for the new justice. Me thinks Brian Camenker is probably more upset that Sally Naumann is getting more press than his ridiculous rant trying to link Lenk to the "Falsettos" production in Concord (Remember, if given enough time he can link gay marriage to bad air quality, homelessness and any other myriad of issues plaguing Massachusetts)

Sally Naumann is probably best remembered for her "testimony" at the State House when she wanted the legislators to know that gay people were responsible for the Holocaust and waved her copy of the Pink Swastika at them. Then she wanted the Concord town to admonish the school for producing "Falsettos", we know how that turned out.

Now she's writing into the Boston Globe claiming to speak for the other bigots in Massachusetts who have yet to show their face or raise their voices:

THE GLOBE’S elitist and condescending editorial condemning my testimony at the Barbara Lenk hearing was certainly predictable (“Decision on Lenk should focus on her record, not her sexuality,’’ April 29). But I speak for countless parents across the Commonwealth. And, yes, the Governor’s Council needed to hear it.

Parents are sick and tired of the homosexual indoctrination process in the public schools, which now reaches into kindergarten with homosexual-themed story books and into middle schools with the setting up of gay-straight alliance clubs.

Lenk’s elevation to the Supreme Judicial Court would only serve to accelerate the homosexual indoctrination. Lenk prominently appeared in the homosexual-themed magazine Boston Spirit as an “openly gay’’ judge who was described as helping to “create a shift in the culture.’’ Her same-sex marriage reinforces a right invented by activist judges repudiating thousands of years of Western culture. She will be used as a new role model for schoolchildren, and we can expect more anti-family judicial activism down the road.

I testified before the council that the notion that one is born gay is a myth. But the Globe’s editorial assertion that homosexual behavior is like being black or Asian has become the party line.

We need less of this nonsense, not more of it.

How bonkers is that? It's horrible that Lenk was in a gay business magazine! HORRORS! I guess Sally thinks Lenk should be ashamed of herself and keep silent, sorry Sally, it ain't happening and is never going to happen, ever hear of Stonewall?

As for Brian, well, he still gets carried in some off beat online papers across the country like WorldNutDaily and Dakota Voice who still call him a "pro-family" activist, yeah, that IS good for a laugh. His credibility here (did he even ever have any?) is gone and he needs to rely on his small group of anti-gay activists to spout his drivel. His name will always be linked to anti-gay screeds and conspiracy theories how sad is that for a legacy?
Posted by Boston Bud No comments:

This from the Liberty Council

People are celebrating today because the mastermind of the 9/11 bombings was finally defeated. Of course, for the anti-gay zealots like Matt Barber, all they ever think about is sex, (funny how all the "straight" anti-gay people are always thinking about gay sex)
Posted by Boston Bud No comments: