Scott Lively On the Daily Show

I've written before about this infamous "Christian". He claims that Hitler was a homosexual and even wrote the "Pink Swastika" about supposedly homosexuals in the Nazi party, a book that has been discredited by every legitimate historian yet MassResistance keeps using it as a prop at legislative hearings.

As a side note, Scott Lively's "ministry" is now based in Western Massachusetts and has also been named a hate group, like MassResistance, by the Southern Poverty Law Center.

Here's the video from The Daily Show with Jon Stewart, it speaks for itself:

Kris Mineau of the Mass Family Institute (MFI) has been making the rounds lately calling out the "activist judge" who ruled that sections of the Defense of Marriage Act (DOMA) was unconstitutional. It just so happens that Justice Joseph Tauro, or the "activist judge" as Mineau calls him was appointed to the Federal bench by Republican Richard Nixon and was a First Lieutenant in the United States Army.

I wonder if Kris Mineau knows that this "activist judge" became only the second judge to invoke The Adam Walsh Act of 2006 in which allows judges to indefinitely hold child sex offenders in jail if deemed a public danger.

Anyhow, while tooling around the MFI's website I happened on their July 20, 2010 update. Now, the subheading under their name says "Strengthening the family", however, the update was gay, gay gay. Every bullet was anti-gay, or dealt with homosexuality (because the anti-gay crowd love saying words with SEX in them):

I was going to change the link on the left side of the page to MFI but I can see that the Massachusetts Institute Against Gays still fits. They are not only concerned about same sex marriage but are making sure that GLBT Americans are not afforded the same rights as other Americans.
Posted by Boston Bud No comments:

Hat tip to Joe.My.God for this story about how the National Organization for Marriage wants low turnouts for their bus tour so that they can use the video footage to claim that they are being outnumbered and threatened by those angry "homosexual activists". Joe posted a press release by the HRC:

"The bus tour is a total sham, plain and simple," said Fred Sainz, HRC's vice president of communications. "NOM's highly-touted bus tour is less about so-called 'traditional marriage' and more about creating an elaborate and cynical stunt. NOM rolled out a summer of nationwide events in order to draw lawful protesters, all so that NOM and its allies can pepper ongoing lawsuits challenging public disclosure laws with made-up stories of harassment. This unprecedented victimization crusade is the lowest denominator of political activism, and it won't fly."

In events in seven states, NOM has routinely played to crowds reportedly as small as two dozen people including NOM staff members. The organization's public statements on the bus tour have barely mentioned the content of the programs or the substance of its anti-LGBT message, instead focusing attention on much larger counter-protests that NOM has attacked as intimidation and harassment. NOM issued a press release last Friday saying that LGBT supporters have "approached and threatened children," engaged in "bullying tactics" and committed acts of harassment. However, NOM's uncorroborated claims belie legitimate local media reports demonstrating that pro-equality supporters, which have vastly outnumbered NOM's faithful, have been civil. NOM has yet to document any illegal activity or actual harassment, despite the presence of law enforcement at all the events.

NOM's efforts to trump up false claims of harassment are part of a radical nationwide plan to evade long-established public disclosure laws and to hide their political activities from legitimate scrutiny and accountability. In doing so, NOM has falsely alleged that their donors have been harassed and intimidated across the country to justify why it shouldn't have to play by the same rules as everyone else. These tactics have prompted a state ethics investigation in Maine and recent court defeats across
the country.

Of course there have been no arrests at any of the stops and all the ranting and raving has been done by NOM's leader Brian Brown who claims after the Providence stop that "their children were afraid" It's always all about the children.

However, even with the huge turnouts by the Marriage Equality supporters, there have been no signs like this: 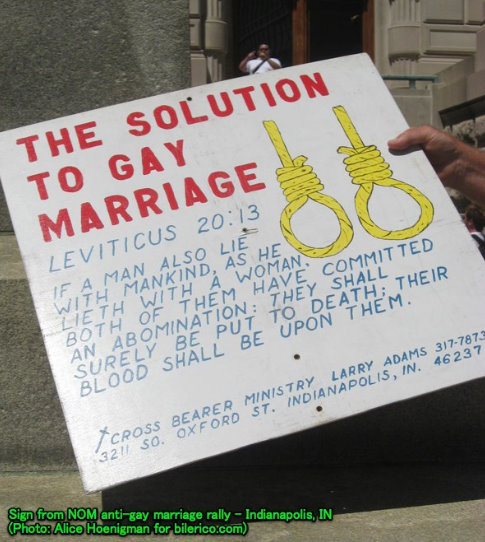 I bet you won't find this picture on NOM's website!

This was supposed to be a post about the Tea Party Rally going on in Lexington this Sunday, supposed to be. I was going to write about all the conservative politicians attending along with the infamous leader of that nationally recognized hate group MassResistance, and, well, see for yourself:

Tea Party to rally on the Battle Green in Lexington

The rally, which will take place on Sunday, July 25, from 1 to 3 p.m., will include addresses by Jesse Segovia, the event organizer and chairman of the Lexington Republican Town Committee, WRKO Radio talk show host Todd Feinberg, and Brian Camenker, president of MassResistance, an organization that describes itself as a “pro-family action center for Massachusetts” and which opposes gay marriage.

Then there was this the next day:

Dahlberg backs out of Tea Party rally in Lexington

Eric Dahlberg, a Republican candidate for state Senate from the 3rd Middlesex District, has withdrawn from a Tea Party rally scheduled to take place in Lexington on Sunday after learning that Brian Camenker, president of MassResistance, would be speaking at the event.

“Some consider MassResistance a hate group,” Dahlberg said. “I don’t want to be within a mile of an event that gives someone like that a stage.”

Event organizer Jesse Segovia, chairman of the Lexington Republican Committee, said he “never gave a thought to uninviting Camenker,” whom he called a personal
friend.

According to Segovia, other speakers followed Dahlberg’s lead and began pulling out during the day on Thursday, prompting him to cancel the rally.

Isn't it great when Americans learn the truth about hate groups! Keep spreading the word.
Posted by Boston Bud 1 comment:

MassResistance in the News...well, not the REAL news...

While I haven't been posting that much recently, I have been keeping an eye on the goings on over at that nationally recognized hate group MassResistance. The truth is that the public has really seen how whacked out they are and that the people in Massachusetts don't give them any mind, if they even know who they are.

So I've decided to start posting the news articles that feature MassResistance, there aren't that many and most of them are usually on some little know website like OneNewsNow (who is that you might ask?), that wbsite is affiliated with the AFA (American Family Association), but then again, the majority of people have never even heard of OneNewsNow either:

Critics fear Kagan would use bench to promote 'gays'

Mass Resistance contends, "Kagan's record while dean of Harvard Law School demonstrates her agreement with the goals of the radical ["gay," lesbian, bisexual and transgender] movement and her solidarity with those activists."

"Kagan's celebration and active promotion of the radical homosexualist and transgender worldview has profound implications," the group argues. "As a Supreme Court Justice, she could be expected to overturn traditional law and understandings of family, marriage, military order and even our God-given sex (what transgender radicals call "gender identity or expression"). She is a most dangerous nominee who must be opposed by all who care about religious freedom, the preservation of marriage and traditional values."

Brian Camenker, the leader of MassResistance, a pro-family group in Massachusetts, told LifeSiteNews.com that saying Phillips is being "indoctrinated" is "not a strong enough word."

"They are taking these kids who are in a very vulnerable and formative time in their lives, and basically telling them they're gay or what have you," he said, adding that "the kinds of things that go on in these parades ... are just really gross and hideous."

"Transexual, S&M, they're getting more into young kids," he said.

Camenker related the story of a MassResistance volunteer whose daughter similarly drew media attention when, after being pressured by the gay-straight alliance at her high school, declared that "she's a lesbian, hates her mother and father, [and] has this lesbian girlfriend."

"The gay newspapers of course wrote it up, because she was involved with us, and they were inviting her to be involved with the gay pride parade ... even the Boston Globe called her up to interview her," he said. Things changed, however, when the girl's mother removed her from the school and sent her to an out-of-state Christian school.

The girl is now preparing to marry her male fiancé in August, and, according to Camenker, dismisses her youthful flirtation with lesbianism.

"She wasn't lesbian any more than I was a lesbian," he said. "I think that happens with a lot of kids. So this is really dangerous."

Hmmm...not really sure what Brian meant by that last comment.

I guess they were also on NPR, I didn't hear them but my husband told me about it. Apparently, have them on NPR only increased their "cringe quotient" as everything MassResistance said on the air was crazy.
Posted by Boston Bud 1 comment:

NOM rolls out the Hate Bus 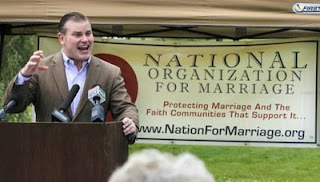 The National Organization for Marriage is rolling through a state near you to "protect marriage" yet what exactly they doing to protect marriage is unclear. All they have done to "protect marriage" is to advocate discrimination against gay and lesbian couples and state that they're not bigots. They haven't done anything to actually protect marriage.
Of the millions of dollars they have raised have they ever directly helped the children they claim to protect? No. Have they reduced the divorce rate in any of the states that they claim victory for preventing marriage equality? No. (Massachusetts still has one of the lowest divorce rates in the country even after 6 years of marriage equality, what does THAT tell you?)
They held up a beauty queen as a model of God's work against marriage equality and then pushed her to the curb when it came out that "God's model" was doing some pornographic modeling of her own and sending sexting it off on her phone.
Maybe they should have started their tour in Argentina where that country just adopted marriage equality.
Posted by Boston Bud 2 comments: