Next week is turning out to be a busy week for the anti-gay bigots:

Some interesting notes on the above. Brian and Amy always have their camera in hand except when it comes to their "gala", they threatened to show pictures of the past "galas" but somehow never get around to posting those pictures, hmmm..... They have photos of Gay Pride events, they even post pictures of school children on their site, but a picture of their "supporters," no where to be found. Who knows, you may find pictures of this event right here so keep posted.

Update to the October 3rd event: Linda Harvey, a "researcher" on homosexual programs in the public schools and founder of a group she started on the Internet is no longer going to be strutting her stuff at the Acton forum apparently. Massresistance gives no reason for the change either but lists a John Russo as taking her place.

I also found this gem on the "new" Massresistance web site:

The superintendent of schools and chairman of the school committee have contacted one of the parents involved. They want to meet with him. They are concerned about "safety at the event." They apparently want US to provide police protection.

Our question: Safety from whom? Certainly none of the pro-family people would be a threat. Are the school officials afraid that homosexual activists might do what they do at so many other events they don't like - cause a disruption and threaten violence? 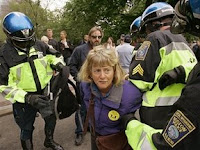 Barker or Parker, whatever, has made quite a little cottage industry of nomadic gay bashing. Is this a great country?

Speaking of which, what happened to Ms. Steele?

Also, can you list RedMassGroup and MassGOP.com under sites that preach hate? The Mass GOP doesn't seem to be able to comprehend why Patrick won, so are focusing on pleasing their Christian-right "family values" base.

It's hard to find a thread on RedMassGroup that doesn't contain a reference to "gay liberal assclowns."

Worse, the Mass. GOP has made Robert Willington their Executive Director.

You may remember Robert as the leader of VoteOnMarriage.org's anti-gay marriage petition drive. He was also New England chairman of the Alan Keyes for President 2000 campaign. Making him Executive Director was a giant "fuck you" to the gay community.

I see that "ex-gay" gadfly Stephen Bennett will be at the Oct 3 event. He's a strange little man!

One more reason I left the once liberal Mass GOP.

what a joke she is!

Also, it looks like Westboro Baptist will be joining in the objections to the play. Wow, they have a busy couple days in Massachusetts.


Amy Contrada, author of the vehemently anti-gay MassResistance blog and tireless crusader against the Laramie Project play, failed to report that her own daughter will star in Acton High School's production of the play this November. Despite the fact that her daughter will play a TV Reporter and serve as a Moderator for the play, which sensitively chronicles the death of Mathew Shepard, Contrada remains committed to organizing an anti-gay forum at the same High School in October.