Thanks to the commenters who first pointed out the ridiculousness of MassResistance's latest headlines:

1. Boycott against Ford called off – car maker agrees to stop funding homosexual agenda Hats off to American Family Association (AFA) for keeping up the pressure. During the 24 months the boycott was in effect, Ford sales dropped an average of 8 percent per month. Ford says it will meet AFA’s conditions!

2. Virginia Cuts All Government Funding to Planned Parenthood
The people finally had enough! The group’s promotion of abortion and pornography to minors played a big role.

3. Canada raises age of consent for sex from 14 to 16, despite pressure from homosexual lobby After several years of battling, the parents in Canada won a major victory over the homosexual movement. Gwen Landolt of the pro-family group REAL women of Canada told LifeSiteNews.com that the bill was” "overwhelmingly supported by Conservative MPs, most of the NDP caucus, as well as the Attorneys General of all provinces, but the Liberal party had resolutely refused to support raising of the age of consent because of political pressure from homosexuals."

First #1: AFA ALWAYS claims victory even when they lose (much like MassResistance). AFA did the same with the Disney boycott that they conducted for nine years. Additionally, Ford's troubles were because of poor business management and not AFA's members not buying cars.

#2: Are we surprised of anything that Virgina does? Virginia is one of the most anti-gay states in the U.S. I'm surprised they didn't end funding years ago, what took them so long? Oh, right, gay couples marrying was more important.

#3: Is anyone even following what's going on in Canada? I don't know many people in the U.S. gay or straight that would have a problem with raising the age of consent from 14 to 16. If you remember, Georgia allows children under the age of 16 to get married if they are pregnant however, once again, gay couples whether they are 18 or 68 can't get married.

Oh Brian, Brian, how pathetic it is that you have to tout "victories" in other countries as your own. I still don't understand the poor pitiful picture of the Parker's with "thousands" of the letters all in the same envelopes on their laps. That is supposed to be a victory? 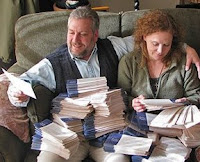 Bud, it turns out that Virginia Democrats got the funding for PP restored...some sort of massive screwup on the part of Republicans there.

In short: Brian and Amy lose again. And they'll keep on losing....