You can tell what kind of year this is turning out to be when two of the sponsors of the Federal Marriage Amendment are Senator Larry "Toe Tapping" Craig, who was arrested for lewd conduct in a Minneapolis airport terminal and Sen. David Vitter, who was identified as a client of a prostitution firm from the late DC Madam. This is what Republican Family Values looks like (Hat Tip to Pam's House Blend):

Two United States Senators implicated in extramarital sexual activity have named themselves as co-sponsors of S. J. RES. 43, dubbed the Marriage Protection Amendment. If ratified, the bill would amend the 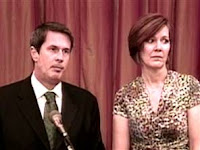 United States Constitution to state that marriage "shall consist only of the union of a man and a woman."

I think this needs a little more publicity. Americans need to be reminded about the Republican family values crowd. Next up on the agenda: How many people, who have been married for 2, 3 or more times, will attach themselves to this marriage amendment? Gotta love the Republican sanctity of marriage.
Posted by Boston Bud

OMG. People who espouse morals sometimes fail to live up to them? The horrors!

Much better to espouse no morals like you, eh?

BTW, the Larry Craig gay bathroom shenanigans and the DC Madam aren't "Republican Family Values". They're YOUR values! Why are you lyin' and frontin'?