Oh the things they dwell on:


Forced major advertising company, ClearChannel, to take down homosexual pornographic billboard over major street in Cambridge one day after lots of our activists contacted them. (2005) 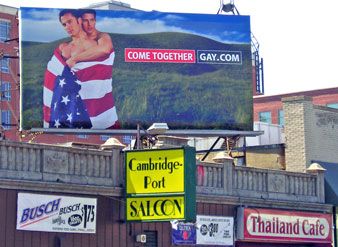 I wrote about this earlier too. If I remember correctly, the billboard was coming down in a few days anyway, so once again Article 8 took credit for it's removal. They obsessed over what the two men were doing under the flag. I like to say that they take credit for the sun rising and setting everyday.

Note to people in Massachusetts, go to your supermarket and see if you can find BayWindows, yep, it's still there. Funny how they also take credit for "pressuring newspaper management to remove pornographic personal ads from their print edition" since the newspaper was already in the process of doing that before MassResistance's hissy fit. They posted the locations of all the BayWindows newspaper boxes on their blog and blamed it on gay marriages. Ironically, they quote BayWindows extensively in their "Mitt Romney Deception Report", not bad for a "pornographic newspaper".

Oh look, the sun's rising, I'm so glad MassResistance is on the ball!
Posted by Boston Bud

At the time ClearChannel said they got 5 (that's FIVE) calls about the billboard:

I have vague memories of the Cambridge City Council issuing a fine as a result, but can't find a link.

Wow. Seriously, I'd been trying to find a listing of Bay Windows box locations, since it's not always convenient for me to be in the Fenway area every week (at Fenway Community Health, not the Fens) to get a copy...I couldn't find a list on Bay Windows' site, so this is actually extremely useful to me. I'm assuming that making access to the paper easier wasn't their goal, but that's what they achieved!