Well, well, well. Ms. Massresistance seems to know a lot about what when on at the constitutional convention since she is obsessing about time lines listed in Bay Windows. I won't go into much detail about her post but I will dissect some of the more interesting things she mentioned:

Many of the Irish- and Italian-heritage, and nominally-Catholic legislators go right along with the Christ-denying, anything-goes UUs. (Isn't this apostasy?)

There she is attacking someone else's religion. Just a few days ago she was bitching because the Religious Coalition for Marriage was picketing outside of the Tremont Temple yet she has no problem attacking a whole religion. Unless you worship her God in the way that she says you should you are evil. For the record Ms. Massresistance, apostasy refers to renunciation and criticizing of one's former religion, so NO, it's not apostasy. But then again I suspect you would have attacked the Christians for taking in the Jews in Nazi Germany because they differ on who Jesus was/is.

And after the homosexual priest sex-abuse scandal in the Catholic Church, the Mass. Catholic Conference has lost much of its power to sway the Catholic legislators.

Once again, she's blinded by the Dark. It was a PEDOPHILE priest sex-abuse scandal, repeating the tired old lie that gay people were responsible for the abuse is criminal as well as stupid. Unless of course you forget about the girls who were also abused by the priests (not to mention the bishops who looked the other way and actually moved the sick priests to prey on more children). There is a wonderful Letter to the Editor in the Globe today that addresses this issue head on.

I love this section:

Another striking thing about that day was the rowdiness of the queer activist crowd, both inside and outside the State House. A few other passages from this now-missing report reveal that they are not as polite as the media likes to pretend. And they're very skilled at intimidation and harassment.

Now when I entered the Great Hall with my camera I was taking pictures of everyone, the pro-equality people, the legislators, and anti-gay group. Strangely enough, it was only the people from the "Vote On Marriage", the so called "Christians", that were belligerent. 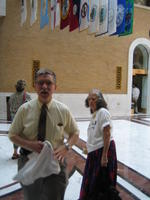 Here's a picture of one guy that ran up to me after I was taking pictures and wanted to know everything about me (my name, who I was with, etc.. I felt like I was getting interrogated) However, according to Ms. Massresistance, we were the ones intimidating others. I guess he never met up the woman outside holding up the Article 8 sign who refused to give her name or maybe they were together?

Finally I'd like to address her calling us "rowdy". I thought we were patriotic (we kept to patriotic songs), fun and yes, we were loud (there were a lot of us). We were there because bad people were trying to taking away our rights. And, we will be there again and again and again as long as bad people keep trying to take away the rights of a minority. You see, these bad things people like you Ms. Massresistance, Article 8 and Mass "Family" Institute do directly affects us. We will not stand idly by while you try to strip protections from families so if that is what "rowdy" is, Yes, we were rowdy. Discrimination will not be tolerated now or in the future.

And when you try and take the children away from gay and lesbian parents (and I know that's next on YOUR agenda) the fight will continue.
Posted by Boston Bud

Wrong -- 3/4 of the male victims were postpubescent males (around 14 or 15), making most of the perpetrating priests homosexuals.

no, you're wrong anonymous! I wonder who you are? hmmmm. numbers don't determine your sexuality. Gay preists are gay priests. Pedophiles are pedophiles. Two different animals. Ask your husband or priest....

Yep, and then there are gay pedophiles.