Inside there were people from the Vote For Marriage Group. They were giving out T-shirts but it appeared that they had a lot of T-shirts left at the end of the day. Again, there weren't many of them. They were chanting some words and praying. 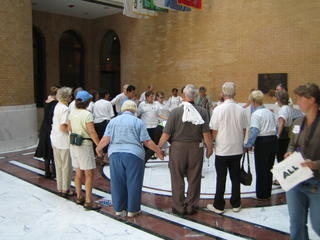 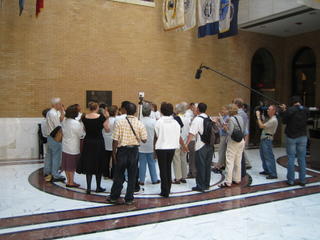 Their group dissipated very quickly after the convention began with the exception of a very small group. Interesting enough, they only made noise when the person they supported were speaking (i.e., Phil Travis). Notice the woman in the center, she was on her knees crying out and making all kinds of noises. 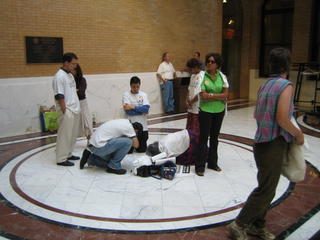 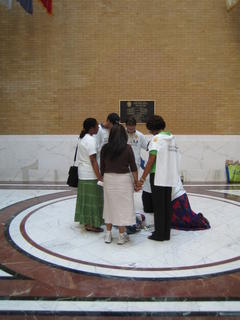 That woman is being totally selfless, is weeping for you, and begging for forgiveness on your behalf, and you have the audacity to call that hate?

Selfless? She is praying to take away the rights of individuals in the Commonwealth. I would suggest she pray for the victims of Katrina. I'm sure there were many people "praying" over the souls of white Americans who were marrying black or yellow Americans since the we are "not supposed to mix the races" too. Yeah, she was praying and God answered her prays. God said "NO Discrimination in the Constitution"

I am no longer allowing people to post other people's telephone number and addresses. If the information is in the public domain then people can go and find them there. Unlike the citizen's petition where the names of people who sign become public information that is not the case here. Regardless of how hateful or homophobic these people are, I will not allow this blog to be dragged to the same level as Massresistance or Article 8 and start publishing home telephone numbers.

Who gave her the right to pray for my forgiveness? I have done nothing wrong and are only asking for marriage equality. Selfless? I have no doubt in my mind that woman was putting on a show for the cameras.

By the way, I agree with the above comment. It is just plain nasty to publish private contact information of anyone.