This was at about 12:00PM. The group was definitely smaller than last year and there was practically none of the people preaching hate as there were last year. 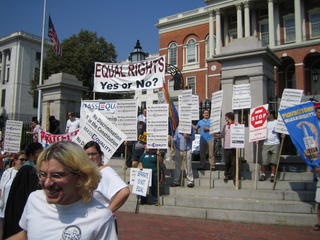 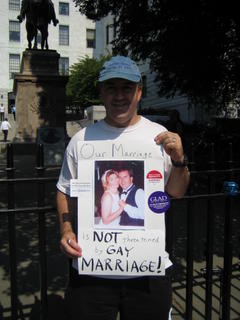 This picture is not as it seems, look at the fine print on the poster.

They kept everyone on the 2nd floor this year instead of outside the chamber. 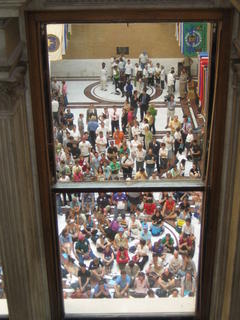 Sen. Brian Lees, (R- Springfield) opened up the convention and gave an impassioned personal note. He came right out to the Hall to speak to reporters after his opening. 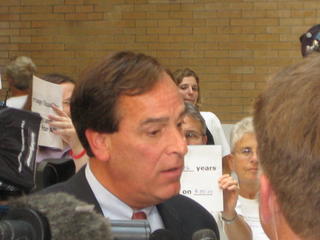 He later spoke at the Marriage Equality Rally in Nurse's Hall following the convention.

There were a lot of legislators in Nurse's Hall following the convention. It was amazing. People were crowding in on the main floor, up the stairs and up on the balcony. 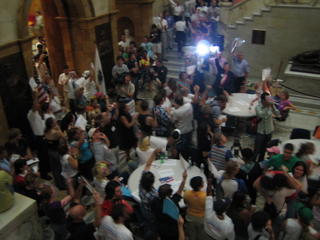 One woman from the "Vote For Marriage" group kept walking through the crowd and heckling the speakers however she was overshadowed by the voices of victory.
Posted by Boston Bud

Amazing on the Lees turnaround. I saw him once on the floor of the Senate and was at that time mostly impressed at what a jerk he was being.

In fairness to the people in the photos, we do not know if Ms. Massresistance even attended the constitutional convention since she doesn't even agree with the Vote On Marriage people (the people praying in the circle).
For all we know she could have been standing around among us cheering the Marriage Equality Legislators on, in cognito, but I doubt it, since from reading her posts I'm assuming she would not even want to be next to us. But I could be wrong.

OH, Be sure to check out Article 8's coverage of the convention. They are very complimentary to the Marriage Equality side even though they refuse to believe that we would have won even if the anti-gay legislator had voted yes.

The guy in the second picture from the top obviously has his heart in the right place, but the design of his poster leaves a lot to be desired.

If you don't look at the all-too-"fine print" (or the GLAD sticker on the right side), his sign says "Our Marriage [picture of straight couple] NOT GAY MARRIAGE." Guh.

I actually saw this guy's sign. It said, "Our Marriage is not threatened by Gay Marriage." He was a very nice guy and was there to support us. But, you are right, from a distance is has a different meaning.