I guess I must have missed this in Massresistance's latest update:

The longtime leader of the Oregon Christian Coalition and staunch opponent of gay rights admits in a newly released police report that he sexually touched three underage girls years ago, despite denials of such behavior to a newspaper.

Funny they didn't even talk about it on the radio show that bills itself as "stories you won't hear in the media".

Though, I'm a bit confused because Amy said this past weekend on the show that "Words didn't have any meaning" in Massachusetts yet it appears that the denials made by this Oregon Christian Leader had no meaning at all. I guess they would have only reported it if it was underage boys instead of underage girls.

In their lastest post they talk about the male staffer in Dorchester who was charged with the statutory rape of young girl. Interesting enough, the only parts of the story Massresistance highlighted are:

"He had been in charge of a Baker House program for preadolescent boys."

Go figure! They must have been too busy reading Bay Windows to notice the story about the Christian Coalition leader.
Posted by Boston Bud 1 comment:

Love Really DOES Make a Family

Massresistance is back to bashing gay families. In the lastest post which reeks of jealousy, they rant, raves and basically foam at the mouth about a same sex couple which was named "Parents of the Year":

What better way to hasten their utopian society than place as many children as they can get their hands on with "families" headed by GLBT same-sex couples? Who
cares if heterosexual couples have played by the rules and waited years on end with no adoptive placement?

If you read the real story you find out that the child was taken from a drug addicted mother was born 3 months premature and weighed 2 1/2 pounds when he was born. (Do they ever tell you the full story?)

The story of these men bring to mind the story of my aunt and uncle (in full disclosure, they are my aunt and uncle by marriage) This amazing couple adopts children that are not wanted. They were foster parents for a child born from a crack addicted mother, yes, the child was a crack baby that needed a lot of care. After they had the child for awhile my aunt and uncle were contacted again because the drugged addicted mother had another child (read another crack baby) and they wanted to know if they could care for another needed child. They said yes. These children are now going up in a wonderful loving home.

So when I hear about these men, who took a child no one wanted and are raising him in a loving family I applaud them because I know its not easy. What is easy is to point the finger and say:

Well, there are lots of heterosexual couples in their 20s and 30s dying to adopt a little child. But they are routinely passed over.

but offer no facts or examples just rhetoric.
Posted by Boston Bud 5 comments:

Man oh man, there's so much stuff happening that this post could go on for days (inside joke for those readers who also listen to Massresistance on the radio)

Revue Your History with Varla Jean


This is the video which first appeared on the Gay cable channel Logo when it premiered last year. If you get a chance it is hilarious!

Varla Jean Merman is the superfabulous creation of Jeffery Roberson. Her newest show is Anatomically Incorrect and if you want to see it you have to hurry to Provincetown since its only playing two more weekends.

Update: After talking with Varla's manager, Mark, I learned that Varla is performing in Ptown until Sept 23rd so you still have 4 more week to see the reigning Queen of Provincetown!
Posted by Boston Bud 5 comments:

Pension Protection Act of 2006 and Fairness for Same Sex Couples

President Bush signed the Pension Protection Act of 2006 this past week. It is being held as the most extensive revision of the nation's pension law in three decades. This Act is great news for gay and lesbian couples:

The Human Rights Campaign, a gay rights group, said it was the first time federal legislation has on a broad basis treated same-sex couples similarly to married couples. "Today marks an important day for fairness under the law in America," said its president, Joe Solmonese.

Therefore gay couples will no longer be hit with the tax penalty when a retirement account is automatically withdrawn when one's partner dies. He or she can now roll it over to their own retirement account.
Posted by Boston Bud 1 comment:

Wow, it's only been hours since I posted about the Sen. Allen making a racist remark and now it appears that the Republican canidate for Governor, Bob Beauprez, in Colorado has chosen as his running mate a woman, Mesa County commissioner Janet Rowland, who referred to same sex marriage as beastiality. The Democratic canidate for Governor demanded the Republican drop Rowland from the ticket. But:

"We all say things we don't mean sometimes,'' Marshall said. ''That's what happened.''

Ah, she said something she didn't mean, well do you think it's a step up from saying something you didn't know was a racial epithet? (oh, I guess I was wrong when I said that they weren't still targeting gay people)
Posted by Boston Bud 8 comments:

Of course, like Romney, Sen. Allen claims he didn't know it was a racial term.

The Washington Post is reporting that Sen. Allen's past in which he loved the confederate flag and kept a noose in his office is coming back to haunt him. Oh, Sen. Allen, like Romney, is also considering a run for president in 2008.

Americablog is also picking up what the Washington Post didn't:

Nice of the Washington Post to, yet again, ignore the fact that Macaca isn't just a genus of monkey - in French it's also a slur for dark-skinned people of North Africa, and George Allen's French-speaking French mother just happened to come from North Africa. No, that's not relevant to the story, but the genus of Macaca in Latin is. Uh huh.

It appears that since all the anti-gay amendments have been approved they're now onto people of color. How many times are we going to hear them apologize that they didn't know what they said was wrong? Wow, what a slate of officers we have in contention for the presidency, I can't wait!
Posted by Boston Bud 2 comments:

The APA Weighs in on "Ex-Gays"

For over three decades the consensus of the mental health community has been that homosexuality is not an illness and therefore not in need of a cure. The APA's concern about the positions espoused by NARTH and so-called conversation therapy is that they are not supported by the science. There is simply no sufficiently scientifically sound evidence that sexual orientation can be changed. Our further concern is that the positions espoused by NARTH and Focus on the Family create an environment in which prejudice and discrimination can flourish.

This was in response to the "ex-gays" protesting the APA for rejecting conversion therapy. NARTH, the National Association of Research and Therapy of Homosexuality has no scientific evidence that people can alter sexual orientation yet they are demanding that the APA change its current position which says that such unsubstantiated efforts can often be destructive and damaging to patients.

According to Truth Wins Out some of the methods these "Conversion groups" use include exorcisms, repossessing a client's Calvin Klein underwear because it is deemed "too gay," taking Prozac and drinking Gatorade in an effort to make men more masculine. I saw some guy beating a pillow with a tennis racket on CNN then cuddling a man in his lap as a way to change his orientation, it was hilarious!
Posted by Boston Bud 2 comments:

``Governor Romney was clearly joking when he referred to the Civil War as the `war of Northern aggression' to an audience in Charleston," said Eric Fehrnstrom, his spokesman, who was at the event. ``Everyone laughed, because they understood he was using it in a humorous context."

Fehrnstrom described a joke that Romney recently made when speaking at The Citadel, the military school in Charleston.

Romney talked of baseball player Johnny Damon's leaving the Red Sox to join the Yankees. Romney told them that he and the audience have common ground: They both hate Yankees.

``It was just a passing reference," Fehrnstrom said. ``Everywhere the governor speaks, he tells a joke."

But not to be left out, he still talked (joked?) about gay marriage, stem cells and abortion too. I'm still waiting for his "jokes" about blind people, little people and disabled people since everything seems to be a joke with him.

UPDATE: There's a letter to the Editor in the GLOBE (8/9/06) about Romney "goofing"on the Civil War:

GOVERNOR ROMNEY claims that his reference to the Civil War as the ``war of Northern aggression" was a joke (``Aide insists Romney just being civil," Page B1, City&Region, Aug. 8). It was red meat for neo-Confederates, but an insult to the memory of the 18,000 Massachusetts men who died defending the Union. It's also false history: It was South Carolina state and Confederate troops that fired on the Stars and Stripes at Fort Sumter in April 1861, initiating the war.

Romney would rightly consider it an insult to his Mormon faith if someone asked ``How many wives do you have, governor?" and then tried to pass it off as ``a joke." Even in politics, some things are never a joke.

Ellen Goodman in today's Boston GLOBE hits the nail on the head on the recent marriage rulings in New York and Washington:

NOW I got it. After hours spent poring over Washington state's Supreme Court decision upholding the ban on same-sex marriage, I've finally figured it out. The court wasn't just ruling against same-sex marriage. It was ruling in favor of ``procreationist marriage."

The Advocate College Guide for LGBT Students was just released on August 1st. It lists the best 100 colleges and universities for LGBT students. I'm proud to say that I'm an alumni of one of the top 20!

This new guide profiles the 100 U.S. institutions with the top "Gay Point Average" on critical LGBT issues such as: 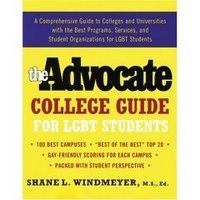