Yes folks. It appears that MassResistance has been using Dr. George Rekers documents to boost it's "It's bad to be gay" creed. So I guess it's bad to be gay unless you pay for it?


On April 8, 2010 MassResistance posted on its blog the following:

Pediatricians Warning Schools: Do Not Promote Being 'Gay'

We have lived the nightmare of GLBT activists meddling in the life of our family, and cruelly targeting a confused young child. Luckily, our personal stories have turned out well.

But how many young people are drawn into unhappy lives -- even the dangerous sadomasochist underworld -- by the twisted preaching of GLSEN, PFLAG, and their "Safe Schools" agents?

The American College of Pediatricians is right on target with their new report, "Facts about Youth."

And guess who's one of the American College of Pediatricians? Yep, you guessed it, Dr. George Rekers! This bogus group sent out the letter to Superintendents around the country right before Dr. George Rekers took his European trip with an escort from Rentboy.com.


Here is a link to Rachel Maddow's reporting on the Rekers scandal and her expose on the American College of Pediatricians.
Posted by Boston Bud 5 comments:

Dr. George Rekers, board member of NARTH ( National Association for Research & Therapy of Homosexuality.) and one of the founding members of the Family Research Council (who until just yesterday could be found on their website but has since been scrubbed of any trace of Rekers) was spotted at the airport with a RENTBOY.COM, see picture below. Major hat tip goes out to Joe of Joe.My.God for first alerting me to this story. Rekers is also one of the "Dr's" in the fake pediatrician group that MassResistance is always touting: 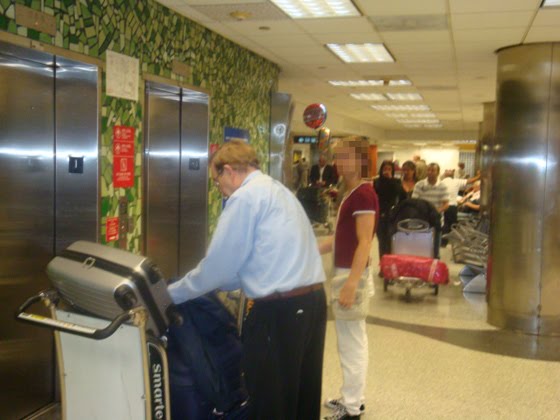 The Miami New Times! first broke the story about

On April 13, the "rent boy" (whom we'll call Lucien) arrived at Miami International Airport on Iberian Airlines Flight 6123, after a ten-day, fully subsidized trip to Europe. He was soon followed out of customs by an old man with an atavistic mustache and a desperate blond comb-over, pushing an overburdened baggage cart. That man was George Alan Rekers, of North Miami — the callboy's client and, as it
happens, one of America's most prominent anti-gay activists. Rekers, a Baptist minister who is a leading scholar for the Christian right, left the terminal with his gay escort, looking a bit discomfited when a picture of the two was snapped with a hot-pink digital camera. Reached by New Times before a trip to Bermuda, Rekers said he learned Lucien was a prostitute only midway through their vacation. "I had surgery," Rekers said, "and I can't lift luggage. That's why I hired him." (Though medical problems didn't stop him from pushing the tottering baggage cart through MIA.) Yet Rekers wouldn't deny he met his slender, blond escort at Rentboy.com — which features homepage images of men in bondage and grainy videos of crotch-rubbing twinks — and Lucien confirmed it.

That's where the story started, but it's legs are still running. Within hours the Family Research Council erased all traces of Rekers from their website. Then, Rekers responded to Joe on Facebook. It's very disturbing how he equates a 10 day vacation with a 20 yr old rent boy to being like Jesus spending time with sinners, but he does. It is all too delicious to take in in just one day. Like everyone else, I'm just wondering which hypocrite will be next?
Posted by Boston Bud No comments: