The Truth is Out Here

It seems the Religious Right has been quoting the anti-gay MassResistance at various public hearings so I put together a few bullet points about MassResistance that may prove useful about what or who MassResistance/Brian Camenker really are:

This website was created to expose the truth about MassResistance so please feel free to use any of the infomation on here. 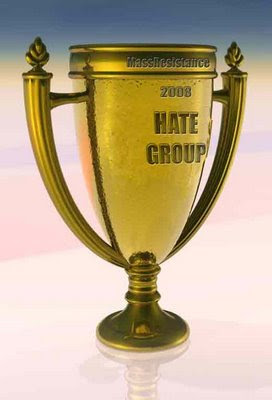 Both of their Wikipedia entries for Lively and Camenker list them as being "conservative" when in fact they're anti-gay activists. Their histories have shown that these two men are obsessed with gay people and make their living off the hatred of gays and lesbians.
Posted by Boston Bud 2 comments:

Psst...Did You Go To The Annual Brian Camenker Benefit?

It's been almost a month since the anti-gay MassResistance Annual fundraising Banquet or the Brian Camenker benefit (depending on how you look at it). You remember, the one that was supposed to "unveil our plans for winning the culture war in the Massachusetts State House". They were supposed to have 3 GREAT Speakers too! A washed up one term Republican Rep. from Texas, the Nazi revisionist Scott Lively and the ever present always in the court room Mad Dad David Parker. Gosh, I would have been sitting on the edge of my seat after listening to them! The banquet was such a big hit that everyone is talking and writing about it...except they're not.


In fact, even the anti-gay MassResistance website doesn't have anything about it however they did post an update on Feb. 13th. It stated that the anti-gay MassResistance, AKA Brian Camenker, searched high and low to find sponsors for his anti-gay bills in the Mass State House (hey Brian, how's that winning the culture war working out for ya in the Mass State House?). This past week BayWindows reported:

According to a post on MassResistance’s website the group "spent days in the State House, going door to door trying to get sponsors for these bills and talking to as many people as we could. We finally got what we needed, but it wasn’t easy."

And how does the future look for these anti-gay bills, BayWindows reports:

None of the group’s past anti-gay bills have gained traction in recent sessions, and with the appointment of two LGBT rights supporters, state Rep. Marty Walz (D-Boston) and state Sen. Robert O’Leary (D-Barnstable), as co-chairs of the Joint Committee on Education, there is little indication they will meet with greater success this year.

Well, there never is any information on the Camenker anti-gay benefits, whether this is because no one shows up or the people that do go are too embarrassed to publicly support the anti-gay MassResisance I'm not sure (even the hotel said they weren't holding a room for MassResistance so apparently Brian Camenker can't even reserve a room in the organization's name!)

If you're a fan of Project Runway you're sure to

love "RuPaul's Drag Race":
9 contestants are vying for the title of America's Drag Queen Superstar. In the first episode these nine contestants must re-invent their glam drag looks using thrift store clothing and tschotchkes from the 99-cent store. Guest judge Bob Mackie stops by to help RuPaul weed out the drag queen with the least style.

Each cast member must embody the charisma, uniqueness, nerve and talent that made RuPaul an international drag superstar. The judges will determine the bottom two contestants of the week. Those contestants then compete in a show-stopping battle-royal "lip-synch for your life" performance that will determine if they will "shante" and stay and who will "sashay" away.

The show is a lot of fun. I first saw it while I was on the treadmill at the gym and almost fell off. New episodes air on Logo on Monday nights at 10:00PM but plays throughout the week. It also airs on VH1 at different times. Check your TV guide for more information.
Posted by Boston Bud No comments:

OK, it's been a week and a day since the most powerful MassResistance Fundraising Banquet ever with the $5.00 cheaper MEAL and MassResistance, aka, Brian Camenker, still hasn't posted anything about it! He, I mean they, were supposed to unveil the plans for winning the culture war in Massachusetts State House (Brian did ya get the memo that the new Speaker of the House is FOR Marriage Equality?)

Nevertheless, they did find time to post these jewels:

First, ensuring themselves another spot on the Southern Poverty Law Center's Hate Group list, MassResistance goes after a transgendered janitor who works in a school AT NIGHT! MassResistance is supposedly concerned about the children but instead they are going after a hard working person who is just trying to earn a living and pay their bills, unlike Brian Camenker who sends out emails asking people to donate and fund HIS lifestyle of hate.

MassResistance also provided the telephone numbers and email addresses of the school administrators so their lemmings can verbally and electronically harass them.

In the second bullet they once again claim success for "killing" bills by the homosexual lobby. Yeah Brian, add it to your other "successes", you know, the ones you had nothing to do with but claim victory for anyway. Oh, and if by "killing" you mean sent to a study, yeah, you killed it and when the Legislature passes them in this session how will you spin those? Like you did when you claimed you stopped money from funding the gay and lesbians programs in the state:

or when you successfully got enough signatures to overturn the repeal of the anti-gay racist 1913 law:

What this Referendum means
This is a big deal. Besides eventually stopping a horrible social experiment from being forced across the country, this sends some very strong messages...
And as we said, the rest of the Boston media isn't far behind. They really don't get it. They're going to be very disappointed when we get done . . .

Keep up the good work Brian, the economy's bad, we need a good joke to laughter at.
Posted by Boston Bud 1 comment: