There's a hot new TV show on Court TV called "'til Death do us part" which is narrated by John Waters a la Rod Sterling in the Twilight Zone (John plays the Groom Reaper).

Each episode features the Groom Reaper recounting the story of a bride and groom on their wedding day which eventually leads to one of them committing murder. (The story takes some twists and turns so you're not sure which spouse will do the deed) While I don't know whether the stories are ripped from today's headlines, they do sound familiar. Although the real news stories of heterosexual couples killing their children, mutilating and abusing them are MUCH more scary.
Posted by Boston Bud 1 comment:

Um, Brian, You're About a Week Late with Your "Current Big Story"

Oh, Massresistance/Article 8, aka Brian & Amy are at it again. Once again they are attending meetings of the Massachusetts Commission on Gay and Lesbian Youth. Now supposedly they are not gay or lesbian nor are they youth so why are they attending? I'd guess it's because of their gay and lesbian photo fetish, after all, they did bring their cameras. Their "teaser" below the "headline" on their hate site proclaims:

"I feel I saw the face of evil last night," writes parent who observed meeting.

They are notorious for making it seem like they have all these supporters when it's usually only Brian & Amy who attends any of this stuff. Case in point, if you click on the link and enter their site of overused adjectives (chilling, horrific! frightening!) they include an incident that Queer Today and this blog talked about over a week ago only Massresistance neglects to provide details:

Trevor Wright even taunted one of the audience members after taking her photograph. He clearly wanted to send a message.

What Brian and/or Amy neglected to say was that the "audience member" was actually Amy, who ran from the room and didn't want HER picture taken. (Again, not giving a name makes it seem like there were lots of anti-gay homophobes there that night.)

They do provide a number of photos that either Brian or Amy took at the meeting. For the life of me I still don't get how they think posting pictures of attractive, happy GLBT people is going to SHOCK their viewers. We got so many compliments from the image they stole from us and posted on their website of our wedding. We are proud of who we are and no amount of their intimidation tactics or threats is going to force us back into the closet.

Today's post is brought to you by the adjectives/adverbs frightening, discouraging, effeminate, and chillingly.
Posted by Boston Bud 4 comments:

Back to the Bigot Business

Do you recall when the Mass "Family" Institute issued a press release saying that the other side was being uncivil?

Newton Upper Falls - Massachusetts Family Institute (MFI) today announced an initiative that seeks to build mutual respect and dialogue between those who support and those who oppose same sex marriage in Massachusetts.

Advocates for same sex marriage routinely have called supporters of the marriage amendment hateful and bigoted, while amendment supporters say they are simply following the constitutional process to have their voice heard on what they view as an important social issue.

Gee was that only 2 months ago (they issued this right around the time alleged assaulter and Camenker friend Larry Cirignano was in the news). How times change. This the latest email from MFI where we find them listing columnists who defended ignorant Joint Chiefs of Staff Chairman Gen. Peter Pace's remarks about the immorality of homosexual behavior (I'm sure they were doing this just for educational reasons right? 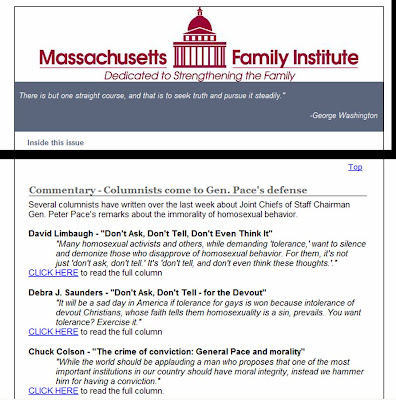 Even as this initiative beings to take shape, MFI and VoteOnMarriage.org will continue to urge supporters of the marriage amendment to be respectful of human differences and always maintain a dialogue that affirms the dignity of every person.

If you think they are respectful and maintaining the dignity of every person then I've got a unbaised radio show for you to listen to on Saturday morning. And to think that these people still can look in the mirror and call themselves Christians.

Smile, You're on Candid Camera

As I scanning stories online yesterday I saw one particular story that caught my eye:

Couple sentenced for having sex in front of child
PROVIDENCE, R.I. --A Woonsocket mother and her boyfriend were sentenced to three years probation on Monday for having intercourse in front of the woman's 9-year-old daughter to teach the girl about sex.

It caught my eye because it reminded me of a story Ms. Massresistance wrote a while ago:

From the time a child comes into the world, he observes his parents (one male, one female) interact. Sometimes they hug or kiss. And yes, he registers the fact that they sleep in the same bed. And sometimes the bedroom door is locked and he hears noises. This is a child's normal introduction to sex. It is simply put before him in the context of normal, healthy family activities. Pictures of a normal two-parent family in a picture book do convey a message to the child: This is a family.

I guess I was a bit surprised that they didn't put up this new story on their site since it seems to fit all their qualifications: one man, one woman, sometimes they hug or kiss of course they do take it one step further but could be this the slippery slope of teaching of your child about heterosexuality? (Massresistance/Article 8 loves slippery slopes, I mean they must, they talk about it all the time)

You also must check out QueerToday's post about the Monday meeting of the Commission on Gay and Lesbian Youth. It seems the people who love to take pictures of gay and lesbian families and children don't want their picture taken:

She [Ms. Massresistance] put her note pad over her face and told me that I could not take her picture. I pointed out that it was a ‘public’ meeting and I can and will! She went out into the hallway and cried to the State Police officers. The officers are out there to protect the commissioners from people like her and the repressed homosexual Brian Camenker. They backed me up and told her that I had every right to take any pictures I wanted. *as Brian Camenker took pictures of me*

Just another example of how they intimidate gay and lesbian people yet shy away from the camera when they know that their faces will be posted. Keep up the good work Trevor!
Posted by Boston Bud 1 comment:

Two mock bills advocated legalizing polygamy, and we heard about a mock hearing on the subject that afternoon in the State House. The polygamy bills were mixed in with some silly bills (annex Maine; change the state muffin from corn to cranberry, etc.), and others on arguably legitimate topics (legalize gambling; require state-owned vehicles to use alternative energy; ban cell phones in public schools, etc.).

Further down she has the nerve to ask:

Now who is putting these ideas [polygamy] into young teens' heads?

Well Lordy Ms. Massresistance, YOU did. She first mentions polygamy way back in Feb 2005, only the second month after she started posting: 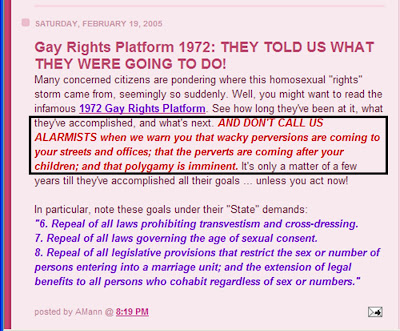 And then she essentially gives the students arguments for their mock hearing: 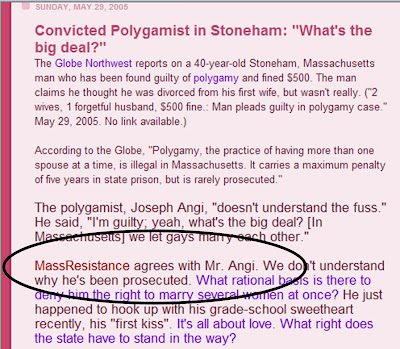 What's the problem with letting the students discuss it? Is she afraid they will bring up Jacob and all his wives from the Old Testament and use the argument that "The Bible said it was OK"? I'm guessing she just wants the kids to not think for themselves even though her and her ilk have been talking about the "slippery slope" for years with their children in tow.

As Stephen Sondheim wrote in "Into the Woods":

Careful the things you say

Careful the things you do

Children will see and learn

Jeff Jacoby's latest column appears to be chastising Ann Coulter for her offensive remark about Presidential candidate John Edwards and gay people. However about half way down you see that it's really about the "liberal media" and how a comment by Bill Maher about V.P. Dick Cheney went unnoticed.

Why do I say that? Well, he only attributes one nasty comment to Coulter yet he provides a list of things Maher has said in the past. The fact that Maher said these things on his own show on a cable network that you have to subscribe to doesn't matter (or the fact that other Democrats on the HBO show also chastised Maher when he made the remark).

I guess the fact that Ann Coulter called John Edwards a faggot right after she was introduced by Mitt Romney isn't supposed to be important either since Jacoby didn't feel he needed to mention it (BTW, in his introduction, Mitt called Coulter a "moderate") Or that all the Republican presidential candidates with the exception of McCain was there at the conference that Coulter spoke at wasn't important either.

If there is another, it is an end to the double standard that loudly condemns hate speech when it comes from the right, while barely noticing when it spews from the left.

"We need somebody to put rat poisoning in Justice Stevens' creme brulee," Coulter said at Philander Smith College in Little Rock, Ark. "That's just a joke, for you in the media."

My only regret with Timothy McVeigh is he did not go to the New York Times Building.

Talking about the 9/11 widows:

"These broads are millionaires, lionized on TV and in articles about them, reveling in their status as celebrities and stalked by grief-arazzis," Coulter writes.

"And by the way, how do we know their husbands weren't planning to divorce these harpies? Now that their shelf life is dwindling, they'd better hurry up and appear in Playboy. . .

"These self-obsessed women seemed genuinely unaware that 9/11 was an attack on our nation and acted as if the terrorist attacks happened only to them."

Eric Alva was the first Marine to be seriously injured in the war in Iraq. Eric was awarded the Purple Heart. He was a guest on "Oprah".


Oh Yeah, he came out as gay last week in Washington D.C. and called for the "don't ask, don't tell" policy on gays in the military to be abandoned.

Although I'm no longer wearing the uniform of the U.S. Marine Corps, my mission continues to be protecting the rights and freedoms of all Americans. I have realized that I have an obligation to myself, my partner Darrell and gay, lesbian, bisexual and transgender Americans across the country to stand up and speak out for our deserved rights.