Satan Phelps is Coming to Town

It seems that David Parker supporter Fred Phelps of the infamous Westboro Baptist Church is coming to town...again. From Take Mass Action:

Fred Phelps' clan is coming to Boston! The "God Hates Fags" Westboro Baptist Church is coming to picket the Laramie Project at the Boston Center for the Arts. Fred Phelps and his group travel all across the United States spreading their message of hate. When the group comes to Boston, however, they will be helping to drive equality across America.

This hate group, like MassResistance, constantly publish press releases about their antics. However, they have been known to say they are going to be elsewhere and never show up. Communities tend to band together when this extreme group comes around. I think the last time they showed up was to support David Parker.

Anyhow, this time Driving for Equality is planning something. Head over to Chris's website to get more information.
Posted by Boston Bud 2 comments:

Check out this video from the makers of Hairspray over at Funny or Die.com: 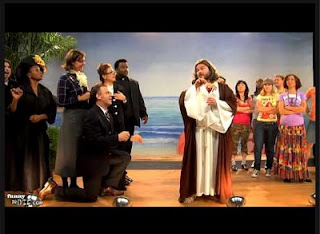