I read with interest MassResistance's latest posting where they appear to be thrilled that they think they're stopping civil unions in Hawaii, however, it wasn't until I read their March 11th email that I was ROTFLMAO: 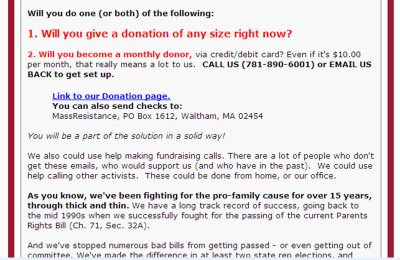 In case you can't read it:

Will you do one (or both) of the following:

1. Will you give a donation of any size right now? (large font)

2. Will you become a monthly donor, via credit/debit card?

Now how many people in their right minds would trust Brian with their debit card information? Then again, the people that do contribute to him are NOT in their right minds not if they know that most of the money given to MassResistance goes directly to Brian. He's even trying to get people to volunteer their time to do fundraising for him too!

Wouldn't you think that having MassResistance named a hate group by the Southern Poverty Law Center would increase their donations? Guess not. Oh, and they recommend people go to the MassResistance blog, which hasn't been updated since Dec. for more "in depth" information.

Sit back, get some popcorn and watch the fireworks, the finale is starting.

Just a few reasons why the anti-gay MassResistance is a Hate Group:

OK, so the last bullet doesn't make them hate group, just a bunch of lying pathetic losers who will say and do anything to get any publicity possible.

Anti-Gay MassResistance is Proud to be a Hate Group

The calendar challenged MassResistance finally updated their website after almost a month of inactivity and what do they post? A very long diatribe about how they're NOT a hate group and how the Southern Poverty Law Center, is really a far left pro-homosexual organization, who knew?

It's a common theme of the left, going back to the Saul Alinsky tactics in the 1930s, to demonize your enemies if they become effective. This was adopted by the homosexual movement. In their classic manifesto After the Ball, Marshall Kirk & Hunter Masden advised activists to compare people with traditional values to the Ku Klux Klan (which lynched blacks).

For the second year in a row, the far-left Southern Poverty Law Center (SPLC) has declared MassResistance, along with other pro-family / Christian / traditional values groups around the country, as "hate groups". In most cases, the "crime" is publicly disagreeing with the homosexual agenda. There are no specific reasons given, besides a general label.

I wondered how many times the anti-gay MassResistance has to reiterate that they're "pro-family" because no one is buying it. It's also interesting that the anti-gay group cherry picks the groups that they say SPLC names as hate groups. For some reason they fail to mention that Fred Phelp's Westboro Baptist Church, the Watchmen on the Walls (another Scott Lively group) and the Heterosexuals Organized for a Moral Environment aren't anti-gay hate groups either.

The anti-gay MassResistance certainly has a lot to say about a group they claim is an angry, arrogant, far left radicals, un-American. pro-homosexual who just tries to intimidate and silence their opposition. (I guess Brian thinks he has the monopoly on press releases too) Me thinks the lady doth protest too much.

This "hate group" stunt is simply meant intimidate and silence their opposition. And there's something un-American about that kind of tactic. Clearly, groups like SPLC consider the truth to be their biggest enemy. But it won't work with us.