Maybe from the State of Lunacy!

As I was scanning the anti-gay stories around the country when I came upon this item about Willard Romney and same sex marriage in Massachusetts. The story itself wasn't surprising except for this one section:

But former state legislator Brian Camenker claims that Romney's moves during the period leading up to the May 17 implementation of the court's order actually helped grease the skids for gay marriage in the Bay State.

The November 2003 Massachusetts high court ruling said that the rights and privileges of marriage had to be applied to everyone -- including same-sex couples -- under the state constitution. It gave the Massachusetts Legislature 180 days to act on a homosexual marriage law.

By April 2004, lawmakers had not acted. But Romney had. Camenker said not only had the governor ordered JPs to perform gay marriages, but he also issued new marriage certificates that replaced the titles "husband" and "wife" with "Party A" and "Party B."

"The legislature never acted. He didn't have to do anything," said Camenker, who is currently president of MassResistance, a suburban Boston-based anti-gay marriage group. "Romney was a major force in creating same-sex marriage."

Now anyone reading this outside of Massachusetts would think that Brian Camenker was a legislator in Massachusetts during Romney's reign. It appears that MassResistance can't get anyone to read anything they write so they are resorting to lying to embellish their stories. If anyone has any proof that Brian Camenker was in fact a State Legislator in ANY state in the United States, please email it to me. I've looked high and low and couldn't find a thing (you would think that the Parent's Right Coalition/Article 8 Alliance/MassResistance would have certainly used that tidbit for some kind of legitimacy) if it was true.

So who is fabricating his credentials CNS or MassResistance?
Posted by Boston Bud 1 comment:

Violent Anti-Gay Movements and Their Connection to MassResistance

I first learned about this issue from my husband who pointed out the cover story on the "Intelligence Report" from the Southern Poverty Law Center. It was about a violent anti-gay movement in Latvia that has spilled over in the United States and it is emerging in evangelical churches serving Slavic immigrants.


A couple of things caught my eye. First Scott Lively (if that name sounds familiar it's because he is the person who wrote the "Pink Swastika" which Massresistance is always alluding to and coincidentally spoke at their annual fundraising banquet.) Secondly, there were these paragraphs which stood out:

Nevertheless, The Pink Swastika has become Lively's passport to fame among anti-gay church leaders and their followers in Eastern Europe, as well as Russian-speaking anti-gay activists in America. Lively frequently speaks about the book and his broader anti-gay agenda in churches, police academies and television news studios throughout the former Soviet Union.

Lively credits the popularity of Russian-language translations of The Pink Swastika to the support of Pastor Alexey Ledyaev, the head of the New Generation Church, an evangelical Christian megachurch based in Riga, the capital city of Latvia. New Generation has more than 200 satellite churches spread throughout Eastern Europe, Argentina, Israel and the United States.

"One of my supporters gave him [Ledyaev] a copy of The Pink Swastika. He was very impressed by it," Lively said in a December 2006 radio show on WTTT-AM, based in Boston. "The European press was bashing them [Ledyaev and his church] for being Nazis. He was finally thrilled that he had something to counter the media with." Ledyaev did not respond to E-mails seeking comment.

Now, take a guess as to who's show he was on in December of 2006...if you guessed MASSRESISTANCE, you are probably right since Scott Lively was on MassResistance's radio show in December! I would also like to point out that Scott Lively is now moving (maybe he's already there) to Springfield Massachusetts.

What's really distressing is the amount of violence that is occurring because of these people and Scott Lively and MassResistance refuse to acknowledge that it is happening because of them. Brian considers Scott Lively his "good friend", are we surprised? Ms. Massresistance has even posted a number of rants citing him.

I really recommend you read the Southern Poverty Law Center's article which exposes what is really going on out there and appears to be coming to this state soon (It appears that it is already here and Scott is just rejoining them in Sprinfield because a man, Vadim Privedenyuk, runs an anti-gay church in Springfield, Mass.)

Update: Apparently they were here during the last Con Con as evidenced here from a picture from MassResistance: 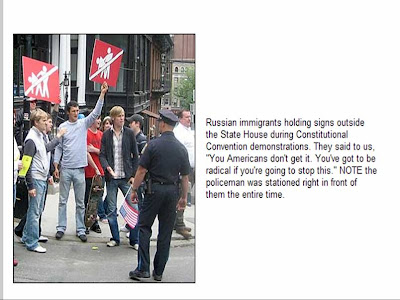 Update 2: Massresistance just posted another picture on their blog from Springfield Mass and guess what, there are Russian protesters in those pictures too. I wonder if that anti-gay church was involved in that nasty billboard that was put up not too long ago? Well, MassResistance has no new audience in Massachusetts so I guess they have to import them from elsewhere.
Posted by Boston Bud 2 comments:

Anti-Gay Leader Fakes His Own Attack

(Mount Laurel, New Jersey) A Princeton University student who argued that his conservative views were not accepted on the campus confessed to fabricating an assault and sending threatening e-mail messages to himself and some friends who shared his views, authorities say.

And of course when he first claimed "he was attacked" the campus conservative group claimed bias like they always do:

Another student wrote in the campus newspaper Friday that the threats Nava received did not get the same forceful response as anti-gay graffiti that appeared this semester outside the dorm rooms of some gay students.

Brandon McGinley called it a double standard, which made it seem OK to "use intimidation tactics to silence the voices of morally conservative students."

But the threats, like the attack, are apparently a hoax.

All this from a person who wants to bring "moral" views to light. Read Fox News story about the first "attack".
Posted by Boston Bud 1 comment:

MassResistance: Still Living In the Past

Things are getting pretty desperate over at Waltham's Hatequarters because MassResistance/Article 8 is really dredging the bottom of the bag.


First they put up a story about Sandy Rios challenging 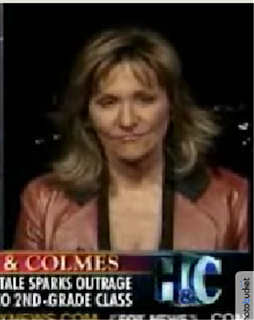 Mitt Romney. Now, I'm far from a Mitt Romney fan, but Sandy Rios! Please! This woman used to be the president of the Concerned Women of America, you know the organization run by men. Apparently she wasn't too concerned about women in America because she either quit or got booted. Although MassResistance/Article 8 has a special place in their heart for her because she came to Boston and tag teamed with "pro family" Alan Keyes at their sparsely attended "forum" the weekend Marriage Equality became legal in Massachusetts.


One of the biggest jokes about "Pro-Family" Sandy Rios is that she is a D-I-V-O-R-C-E-D concerned woman. (What happened to the covenant marriage?)


All these religious wackos are always talking about the sanctity of marriage and about what the Bible says about homosexuality. Well, Mrs. Sandy Rios, Jesus said nothing about gay people in the Bible yet he preached endlessly about the evils of adultery and breaking the marriage vow. Guess you didn't read that part of the Bible huh. Luckily, from one of her TV appearances, Fox News had their banner up blocking the rest of her cleavage from corrupting the minds of youth watching TV.


Then on Tuesday they dragged out their "Polyamory On the Way" argument. Of course they are repeating themselves from a Feb posting which was a repeat of an earlier postings. OK people, same sex couples started legally marrying 3 years ago, where's all the gay polygamous marriage advocates in Massachusetts and why hasn't MassResistance or MFI started a petition to ban them? Enough with the threats!

Why aren't you talking about the successful banquet that you held months ago? What about all those famous people supporting your cause? How's that trashing of Mitt Romney going? If you support "Parental Rights" then you support the rights of same sex parents or do you not support ALL parental rights? Oh, BTW, Marriage is still legal in Massachusetts for same sex couples, just wanted to remind you because you're blog posts are wrong.
Posted by Boston Bud 2 comments:

Can You Judge A Homosexual By His Cover?

I was doing my shopping online (it's the only way to beat the crowds) and found myself on a site that at first I thought was Amazon.com: 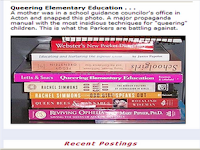 But I was horrified to find out that I was actually on MassResistance/Article 8's website. The picture of those books had me fooled for a second. Of course I had to read the little blurb that went along with it:

A mother was in a school guidance councilor's office in Acton (Now who could that be?) and snapped this photo. A major propaganda manual with the most insidious techniques for "queering" children. This is what the Parkers are battling against.

After I picked myself off floor from laughing so hard I looked at the books again, here's the list:

Of course, I have never heard of ANY of these books (so much for me being the HUGE homosexual activist) however it did get to me asking a number of questions:

Be that as it may, this picture looks like a setup. I'm guessing that a person, not a guidance counselor, owns these books and has them because of an issue they think they have with their child. And, if the picture is real, well, I'm glad that the public school administration is using relevant texts to handle some situations and they're not relying verbatim on the Bible.

One more note, if the picture is real, what kind of parent would bring a camera to school for any other reason other than a school play?