View my complete profile
Come visit my store on CafePress!

We are so proud of our little haters over in Waltham, they finally made it. They didn't make it last year, and this year we knew the competition was tough, but they did it! Congrats Brian and Amy! And to think that we were there in the beginning! Applause!

Oh, what did they make? Well, our duo and the rest of the MassResistance clan made the Southern Poverty Law Center's 2007 Hate Groups list (you have to click on the state of Massachusetts).


There they are along side their brethren the Klu Klux Klan, Fred Phelps' Westboro Baptist Church and skinhead groups. 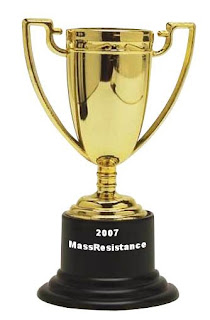 We didn't find out about it until we got our "The Year in Hate" Spring 2008 issue in the mail from the Southern Poverty Law Center. Luckily, it's not only in print but on the web too! MassResistance made the list under the anti-gay subheading (there are only 9 nationwide!):

Congratulations Brian and Amy on the huge accomplishment! We knew you'd make it someday and nobody deserves it more! I have to hurry and send out the press releases!
Posted by Boston Bud

Congratulations to the chief-bigots of Massachusetts, Amy and Brian!