You Write the Caption! 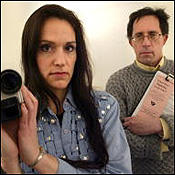 Newton North High School parents Kim Cariani Perakis, and Brian Camenker were forced to leave ToBGLAD Day. (Boston Herald Photo)
This gruesome twosome were video taping students in Newton in December before being asked to leave by the principal. You gotten give it to them Article 8'ers, they bring their camera EVERYWHERE, and they LOVE tape recording kids. Article 8 has a track record of holding up somewhere until the police are called. In this case they left (unlike David Parker). They were ejected for the safety and security of the students. Look at those faces, would you want to subject YOUR kids to that?
Posted by Boston Bud

Mortica and Gomez, The Addams Family

Yes! I could not think of who they reminded me of as I kept averting my eyes, but you've got it!
-

Our Mission "To videotape children at their most vulnerable moments, we like that"